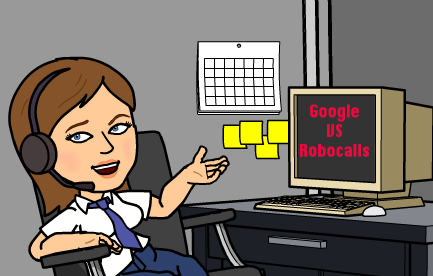 Google filed suit on Wednesday on a search engine optimization firm for making robocalls to businesses asking for people to update their Google listing or they’ll be deleted from Google. The suit is filed against Local Lighthouse Corp whose sales agents make consistent phone calls to companies saying they worked for Google and if you actually talked with them past the recording the company continued to want a $100 fee to fix Google Listings.   Even if you pressed one to get off the Do Not Call List they still called businesses. The company also claimed that your Listings would show up multiple times on the front page. This company also has five other civil suits pending for violating the Telephone Consumer Protection Act.

Google also created a page where you can report abusive callers trying to pose as them. Report Calls Here

I know I have heard a lot of our Clients asking if Google is really calling them. The phone call basically starts as a recording that wants you to press a button in order to speak with an agent and they claim that your Google My Business Listing needs to be updated or that you should be performing better in Google AdWords. It’s believe the company was scamming money out of people and attempting to get login information to get peoples listings or to spam listings.

If Google does call you to verify a business listings or because of AdWords or any other product Google will always have live representatives. The best thing to do if you receive a phone call from an automated robocall is to just hang up. DO NOT press any buttons because when you do that they have your phone number and you’ll just keep getting more illegal calls.