A lot of people might be noticing that Ranking in the Maps and Ranking Organically has changed quite a bit over the last few years. Once Google went to only showing 3 Businesses on the first page it changed the game up and made us as SEO Experts feel pressured to ensure that our Clients get in the Maps. I’ve read so many articles and listened to so many folks saying it’s easy as long as you do A, B and C. After months of working with that Google 3 Pack I have a different opinion entirely on it and don’t think it’s always that easy.

What I’ve been noticing across the country is that Clients who have been ranking in the Maps aren’t necessary ranking very well Organically. There’s always exceptions to this rule of course and yes I’ve seen people ranking #1 in the Maps and #1 Organically but once I did some research on the business I noticed they were companies that had been around since the 80s. So, I do believe Google is looking at the age of your domain a lot more than they ever did before. I understand people want to rank high organically as well but in my opinion if you are in that Google 3 Pack stop worrying because the truth is 60% of the Clicks go to those businesses in the top 3 positions in the Maps. And I agree we want to rank high for both and we strive to do that but I’ve noticed it takes time – I’m noticing more that 6 Months of Link Building for the majority of sites. And again sometimes it’s a lot quicker and works well and honestly I think some people just get lucky.

So, I am hoping Google is still working on making the Maps more efficient. I still see weird things like a Client pointed out a Carpet Cleaning company in Longview TX that has a PO Box on their Maps listing? How the heck did that happen? I did do some research and the business was established in 1989. However, what I do not understand is that their site doesn’t even work? It’s the most frustrating thing? Why is this guy ranking and not our Client? I would understand it if let’s say this guy created that business listing years ago when you could use a PO Box but I can’t wrap my head around the fact that his site doesn’t even work? I plan on watching this listing because there’s no way this can last forever? Hello Google, you shouldn’t be able to rank without a website, right?

I also have had Clients point out businesses ranking twice in the Maps. This can’t last forever right? They have the same phone number and pretty much the same business name on the listing? This is exactly what Google said we aren’t supposed to do, so how and why is this guy getting away with it?

This revamp of the Maps is a new thing and we all need to keep reminding ourselves about that. I think as the year progresses we will start seeing more changes and these things shaking out and correcting themselves. Never the less it’s still frustrating for our Clients and us.

3. Ranking On The Maps

For me personally this is what I like to see. I like to see sites gradually increase at a steady pace, however what I’ve been noticing recently that a business will be like in the 10th position in the Maps and we keep building Links and nothing changes for months and then suddenly BAM they’re in that top 3. I guess at the end of the day you’re just happy you get there right? 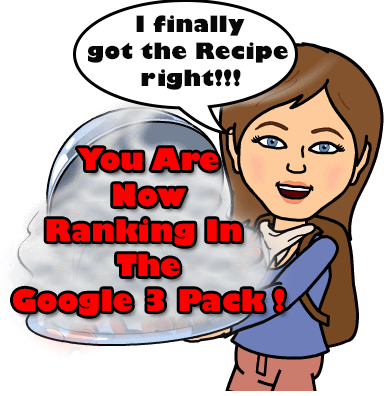 I wish there was a simple recipe to get your Business Listing in the Google 3 Pack but I honestly don’t believe there is. I still believe in doing everything by the book and how Google wants it just for the reasoning that Google likes to come out with these huge updates and when they hit and you tried being deceitful it will come back and bite you. We’ve learned that the hard way from Google.  I think eventually Google Maps will work itself out.