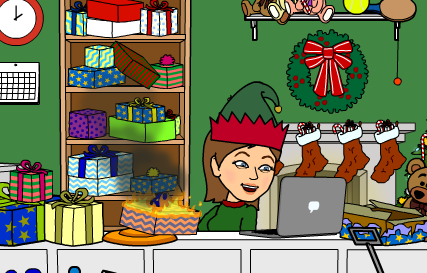 ‘Twas the night before Christmas, when all through the house

Not a computer was on, not even a phone;

The stockings were hung filled with hopes of Ranking,

The children were nestled without any knowledge of how Google can destroy a business;

While visions of Back Links and Citations;

And Google finally acknowledging them filled my head.

When out on the lawn there arose such a clatter,

I sprang from my bed to see what was the matter.

The memory of Google soon fades,

Could that be St. Nick?

Soon he appeared from the sky,

A sleigh and eight tiny rein-deer,

Then I noticed two small logos on his shiny red sled.

Could it be real?

On, Comet! on, Cupid! on, Donner and Blitzen!

To the Amazon Fulfillment Warehouse! to the top of the wall!

Now dash away! Come Robots! dash away all!”

So up to the housetop they flew with 8 little Drones trailing behind.

With the sleigh full of toys, I couldn’t wait for him to read my wish I left in the stockings—

I heard prancing on the roof,

And soon I heard St. Nicholas come crashing down the chimney.

He was dressed like he does in every story or movie I’ve seen,

No bag of toys just 8 little Drones hovering around him with packages attached,

He pointed to the tree and a few Drones flew to the floor to release some gifts.

He soon went to the stockings and pulled out my note,

He read it aloud with that deep cheery voice,

“Can you get me Ranked high on Google this year? That’s all I want for Christmas?”

And then he belted out a high-pitched jolly laugh;

And I soon realized that was a horrible request;

He rubbed his big round belly and said “Give him the special gift.”

A small Drone flew over with a tiny box, and he gently placed it in my stocking.

He crawled back up the chimney and his small Drones followed,

I waited until I heard him fly from my rooftop;

And I soon ran over to see what he possibly could have left,

I pulled out the tiny gift and begin carefully unwrapping it;

His laugh still plagues my ears,

My eyes widen when I spot what was in this tiny box,

And soon I’m reminded that our lives are a gift and shouldn’t be taken for granted,

Such a silly thing that I asked for when there’s so much more important aspects to life.

As I grin from ear to ear looking at this photograph that takes me back to a moment in my life where nothing else mattered,

When I couldn’t wait to be an adult and now I wish I could go back.

I can remember that day, that radiant Red Schwinn, and that giant mud puddle that covered me from head to toe in brown sludge.

My mother screaming, my feelings of euphoria, and my satisfaction with life,

Thank you for that memory.

Don’t forget to stop and enjoy the little things.

“Happy Christmas to all, and to all a good night!”